Vietnam, an economy in transition that seeks to embrace free market ideas 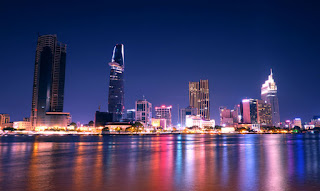 After World War II, in 1954 Vietnam was temporarily divided in two, with a promise of democratic elections in 1956 to unify the country, with a communist government in the north and a market-oriented economy government in the south. However, after a grueling war, the country was reunified in 1975 when North Vietnam achieved the withdrawal of US troops and took the control of Saigon, now Ho Chi Minh City.

The nascent Socialist Republic of Vietnam imposed a communist economic system, with significant state participation and a centrally planned economy, and state ownership of major companies.

However, the centrally planned economy model did not live up to expectations and the five-year plan of 1976 proved to be a failure. In 1986, the Communist Party of Vietnam changed its economic policy and introduced reforms similar to those of China. Thus, something already in the quinquennial plan of 1981, but particularly in the one of 1986, the authorities went towards more pro-market reforms.

Gradually, the authorities have sought to become more integrated into the global economy, for example by joining the Association of Southeast Asian Nations (Asean) in 1995 and the World Trade Organization in 2006, and has also been opening up new spaces for private initiative.

However, today the country is at an important turning point, in which it requires increasing levels of investment, attracting private capital, and increasing the efficiency levels of its companies, which makes it necessary to move forward in structural reforms where the private sector takes a leading role in strategic sectors of the economy.

Its authorities face many and diverse challenges, such as moving quickly to a system of market prices and eliminate subsidies. For this to happen, it is essential to move forward in institutional reforms, where, among others, property rights are properly established and correct price signals are generated that are attractive to bring in the necessary foreign investment to generate more and better jobs.

In Chile, part of the history of the transition and challenges that Vietnam faces are known for us, it is like a déjà vu going back 40 years. And, while they are eager to learn from successful experiences on market-oriented reforms, and where Chile is a very attractive example, in Chile, instead of moving forward trying to improve what we have, we are faced with the fact that some people are pushing to change everything, with foundational reforms, to equations that propose for a greater participation of the State in the economy, and as is well documented, these formulas that did not work and have not worked anywhere in the world.

Vietnam, an economy in transition that seeks to embrace free market ideas
(Source: Claseejecutiva, Emol)
Posted by Ricardo Raineri at 10:44 AM