Informal Economy: Is a street vendor an independent worker? 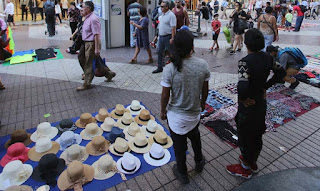 The problems of the informal economy are multiple: no taxes are paid, people have no social security and embeds unfair competition.

Informality is accessed by institutional failures, of the State, where barriers are created that slow or make it very expensive to exercise these legitim activities in a legal way; Or because there is a lack of opportunities in the formal economy, as can occur in a scenario of deceleration with low or zero economic growth, where people do not find or lose their jobs, and are forced to develop informal activities to generate income.

The problems that lead to informality are multiple. On the state side, income is lost because these activities evade the payment of taxes, and people do not have social security, so they often become an additional burden of the state social benefits. On the side of people, they get low levels of income, have restricted access to the formal market for credit or financing, which greatly limits their chances of expanding or increasing their business or activity.

Likewise, those who carry out similar activities, but in the formal economy, face unfair competition, as is the case with established commerce, where they must pay taxes and comply with regulations, certifications, and regulations.

This last week it was known that in Chile the number of independent workers who work in the street exceed 384 thousand, and represent 4.67% of the total employed persons, being the highest figure since there are records in early 2010.

This news shows a daunting panorama of the opportunities that the economy and the labor market are giving, given that there is a growing number of people who do not find work in the formal market, and are forced to go out into the streets to work in very precarious conditions, which is appreciated by observing the sharp increase in street commerce.

The low growth rate of Chile, 1.6% in 2016 (Central Bank), and the drop in investment of -0.8%, which already adds a negative figure for the third consecutive year, responds to a scenario mainly explained by internal factors, since externally the projections of growth from the major economies have gone up.

In order to reverse this slow-growing and job-creating streak, there is an urgent need to improve the business climate, reduce regulations that inhibit investment, slow job creation, and growth. Informal employment, which disguises itself as the euphemism of self-employed workers, is a precarious, non-inclusive employment, and is the result of lack of institutional opportunities and failures as a result of poor public policies.

I leave a question to comment:
Do you think that the informal economy, such as street commerce, is the development path Chile should follow?