Doing Business: Is there a concern with Chile*

Doing Business: Is there a concern with Chile*

October 2015 the World Bank released the Doing Business 2016 report (DB 2016), in its 13th edition. This report, with an universe of 189 countries, assesses the main regulatory and economic constraints that affect the development of small and medium enterprises in ten areas:


These areas are covered by more than 40 sub-indicators, with which DB constructs a global ranking on how friendly is the business environment in a country. The report also looks at aspects of labor market regulation, but this variable is not included in the DB ranking. DB is the best known report of the World Bank Group, which attracts the most attention from the media, business and government, and it has strong supporters and detractors.[1] In the past 12 years and for all countries covered, DB has logged over 2600 reforms in the areas measured by the report. The results have been very promising because the gap in regulatory frameworks between the best and the worst performing countries has narrowed, and several of the worst performing countries have undertaken deep reforms which allowed them to catch-up with the best performing countries. By way of example and globally, if in 2003 on average took 51 days to start a business, in 2015 this figure was reduced to 20 days. Easing the business environment does not mean having less or more inefficient regulation.  As is underscored in the  DB 2016, the best 30 performer countries are not those with little regulation but those with good rules that allow efficient and transparent functioning of businesses and markets while protecting the public interest.

Regarding previous years, the DB 2016 comes with many improvements that were considered in a thorough methodological revision recommended from an Independent Expert Panel that was called by the WBG for that effect in 2013. As previously committed, some of the recommended changes were introduced in the DB 2015 and the remaining ones in the DB 2016. The changes have meant methodological improvements over the previous reports, incorporating in the indicators aspects of quality while the previous indicators only accounted for efficiency. Thus, it has become more difficult to compare the DB rankings in a year with those of previous years. However, beyond the methodological changes, the broad assessment of a country business environment, in those areas measured by the DB report, has not changed as much, as illustrated by the following picture which shows for the sample of countries the distance to frontier scores under the old and the new methodology.

Distance to frontier scores remain similar under the new methodology 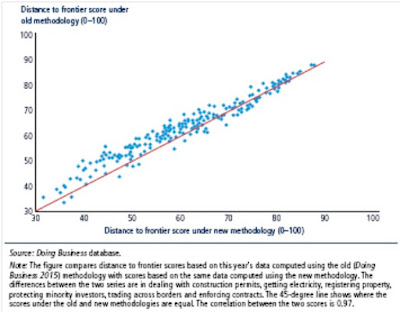 A concern on Chile

For Chile in a window that runs from mid-2006 until mid-2015 (i.e., from the DB 2007 to 2016) the country has a total of 9 regulatory and institutional reforms in the areas covered DB which affect the business environment of small and medium enterprises. Until 2015 DB report, Chile had locked 7 of these 9 reforms, where all of them have been positively assessed by the World Bank in terms of their impact on the business environment for small and medium enterprises. In DB 2016 report, Chile locked two new reforms: a New Bankruptcy Law, positively assessed by the World Bank, which entered into force in October 2014; and a tax reform, implemented by the current administration and which was negatively assessed by the World Bank on the effects that it has on the business environment for small and medium enterprises. Thus and on balance, the net effects of these two reforms are that they cancel one another and Chile remained in the same position of the DB ranking globally. For the first time since the DB report is published, Chile has locked a reform that was negatively assessed on its impacts for the business environment, affecting SME which generate near 80% of employment is the country and are the ones with the greatest difficulties to increase their productivity.

Source: DB2016Click here to see all reforms made by Chile.

But, and beyond the assessment of Chile in DB 2016, the main concern on Chile should be on the long term trends of the country in the DB rankings. With the exception of the years 2010-2013, since 2006 the country shows a long term downward trend in the ranking of DB. While in the DB 2006 Chile leads the ranking in Latin America, with the position No. 24 globally, followed by Mexico in position No. 62 (a distance of 38 positions in the global ranking), in the DB 2016 Chile is in the position No. 48, behind Mexico in the position No. 38 globally. The lack of reform in the second half of the past decade, added to the fact that other countries have engaged in doing reforms to improve their business environment, relegated in DB 2010 Chile to position No. 53 globally and the fourth place of Latin America, behind Colombia, Mexico and Peru. Shortly, on the period of DB 2011 – 2013, Chile leaded again in Latin America, reaching the position No. 37 globally in the DB 2013. However, the DB 2016 has not good news for Chile, where is behind Mexico, in position No. 48, and 24 positions down in the global ranking from where Chile was in DB 2006.

The negative trend in the global ranking of Chile should be a matter of concern. As Chile is not engaging in second generation reforms, many countries are making progress copying the best practices and creating a much better business environment to attractive investments. The advantage that once Chile had in the DB ranking within LAC has vanished, and the country has no longer a strong regional leadership on those areas being measure by the DB report; and competes in these areas with countries such as Mexico, Peru and Colombia.

Chile, a country with about 17.5 million citizens, inserted in a globalize economy with over 7 billion people, has no room for bad reforms that hinder the business climate. For the first time Chile fails with one of the reforms recorded in the DB ranking. Had it not been for the Bankruptcy Act which came into force in October 2014, which cushion the poor assessment obtained by the tax reform and the absence of other reforms, Chile would have felled noticeable in the DB 2016 report.

But beyond the DB report, concerns about the future of the Chilean economy goes with respect to the impacts of the 2014 tax reform on investment, growth, job creation, shared prosperity and poverty reduction; and on the uncertainty that emerges with the announcement to open the discussion for a new constitution, together with some law proposals discussed in the congress that might imply a deep change in the labor and educational arena, where there is a deep disagreement about their benefits for social and economic development.

The DB reports is an invitation for the governments to improve the standards, the regulatory frameworks and to reduce the transaction costs which affect the business environment, promoting simple, well-designed and crafted policies to spur business investment, job creation, economic growth and development. Countries that do not take advantage of the opportunity to learn and implement reforms inspiered on the best practices, will lag behind of those who take the opportunity to improve the business environment and the living conditions for their citizens promoting the proper reforms. 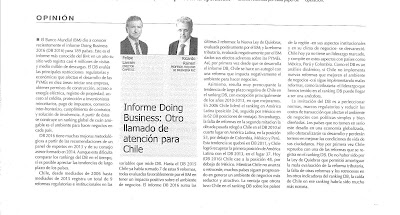 [1] For example, critics against the DB have notice disagreements with issues such as the frequent changes made to the methodologies (change that were recommended by an Independent Expert Panel that revised the DB report in 2013); the retroactive revision of the rankings a year after their publication (because of methodological changes); that it does not give due consideration to on-the-ground reforms compared with changes in laws or written codes; or that it has a built-in bias towards deregulation. However, supporters say that Doing Business is objective, thoroughly researched and spurs reform as countries try to improve their ranking. Further, a group of academics and policy makers has published an open letter to the World Bank calling on it to keep the rankings and broaden the data in the report. Further, as noticed in DB 2016, the majority of Doing Business indicators are based on a reading of the law, which makes the indicators “actionable”—as the law is well within the sphere of influence of policy makers and is thus amenable to change.
http://www.ft.com/cms/s/0/773f9baa-cfb3-11e2-be7b-00144feab7de.html#ixzz3r6BnoHF9. http://www.gmanetwork.com/news/story/543779/money/economy/phl-slams-doing-business-report-in-complaint-letter-to-wb-chief

Posted by Ricardo Raineri at 12:33 PM