How did the US to contribute to global energy security? 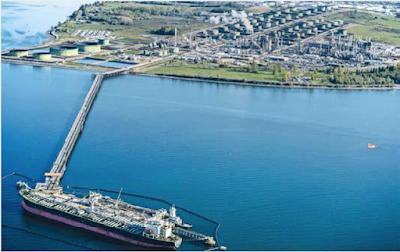 The technological innovation allowed the rebirth of the oil industry, and with that, it was able to stop price hikes.

Regardless of the most favorable scenario, Chile must continue to pursue cost-effective solutions to improve its energy security.

The United States is one of the largest energy consumers in the world and was the first for many decades. At the beginning of the 1960s, it accounted for 35% of the world's primary energy consumption, and now 17.5%, surpassed by China which accounts for 23% of global demand. However, in oil and gas, the US remains as the world's largest consumer with almost 20% and 23% respectively, and is the third largest consumer of coal, with 10%.

The US along with having a high level of energy consumption has also been a net importer, particularly of oil and natural gas, having imported up to 67% of the oil it consumes in the decade of 2000, a figure that now comes to 35%. This energy often comes from regions politically unstable and exposed to wars and conflicts.

The US decline in the percentage of oil imports in its total oil consumption is due, marginally, to a small reduction in domestic consumption, but above all to a significant increase in local liquid production from 6,785 thousand barrels per days in 2008 to 13,800 thousand barrels per days in 2015. In 2016, unconventional oil production accounted for more than 50% of domestic production.

How did they do it? It has been the technological innovation in the oil industry, in horizontal drilling and rock fracturing technology that began to bear fruit since the middle of the last decade, and which was followed by significant increases in productivity.

Depending on the region, the average maximum output of a well increased from about 100 barrels a day in 2007 to over 1,000 barrels a day in 2017. Thus, today a new unconventional well produces the same as was achieved with ten of these wells in 2007. This has led to significant cost reductions that have made the United States unconventional oil industry very resilient to lower oil price levels, and, at the same time, has acted as a break to new price hikes, despite the lower production quota agreed between the OPEC countries at the end of 2016.

A similar situation has occurred with the production of natural gas, which has increased from 510 billion cubic meters in 2005 to 770 billion in 2015, generating surpluses that have open the door to US LNG exports.

The significant technological development in the oil and gas industry not only shook the US energy industry but also global energy markets, including renewables.

Another element that has been essential to the success of the US oil industry is that oil and gas are usually privately owned, with small landowners who partner with corporations to exploit resources, rather than being Government ownership as is the case in many countries.

The increase in oil and gas production and the lifting of export restrictions on US crude in December 2015 has led to exports of crude oil, refined products, and natural gas (LNG) to increase and to reach more countries.

According to projections from the US Energy Information Agency (EIA), by the end of this decade, the country will become a net exporter of natural gas. Something that was unthinkable a decade ago, after the country's consumption and dependence on imported oil increased while local production fell.

The world's largest economy has been and will be, for many years, a relevant player in global energy markets. The energy balance of the US, its policy and technology have led, among other things, to those regions that are abundant in oil and gas resources, often to see in the United States a stable market where they sell their products; other energy importing countries have also benefited from the greater supply of fuel. And, the technological change has contributed with innovations that have been able to apply in other regions.

WITH TRUMP IN THE WHITE HOUSE

With a new administration in the US federal government, it is important to read the orientation of that country's energy policy, and how it can impact global energy markets and security, international relations, technological change, and on the environment.

Since his arrival in the White House, Donald Trump has issued executive orders and has made announcements about the direction of policies during his term. In addition, on March 16, he submitted to Congress the budget proposal "America First: A Budget Plan to Make America Big Again." It proposes a decrease in the resources of several departments, including Energy (-5.6%), Interior (-11.7%), and the Environmental Protection Agency (-31.4%), all of them agencies that have interference in energy matters.

Of its announcements and executive orders, stand out those that look to give a boost to the economic activity and to take advantage of the country`s abundant energy resources, requesting:
·      Streamline the approval of projects that are of high priority for the country, such as those of energy infrastructure that allow to revitalize the economy activity and reduce energy costs.
·       Restrict new regulations and eliminate others, with the aim of relieving people and companies of regulations that inhibit growth and employment.
·      Review federal water and land use control regulations to facilitate access to energy resources.
·      Review the relevance of environmental protection and project development standards.
·     Review the emission and gasoline consumption standards to be adopted by the automotive industry.

In addition, the President would have under analysis the permanence of the United States in the climate change agreement, agreed in Paris at the end of 2015, which establishes commitments to reduce greenhouse gas emissions.

With all the above, an increase in oil, gas, and energy production is expected, which would further lower imports, creating a greater supply of oil and gas in global markets.

HOW DOES IT AFFECT CHILE?

Chile imports about 70% of the energy used, more than 95% of the oil it consumes, and 100% of the liquefied natural gas (LNG) that reaches the Quintero and Mejillones terminals. The country is always very exposed to the vagaries of global energy markets. However, Chile will benefit from US contributions to these markets in the coming years.

A greater global supply of energy coupled with more competition would mean that the price of oil and other fuels will for some time be less influenced by agreements restricting supply from OPEC.

Regardless of the most favorable scenario, Chile must continue to seek cost-effective solutions to improve its energy security, reducing its dependence on what may occur in countries or regions exposed to political instability, and from potential price manipulations which can occur in global markets.

For a competitive Chile, the country must count on an energy matrix that assures reliability of supply, and with energy costs that are a competitive advantage of the country. And in this, Chile cannot renounce to use its main energy resources, within which is the hydroelectricity, and recently the wind and solar energy. These last ones do impose the challenge of requiring other sources to overcome the current limitation of not being able to operate continuously.

On March 28, President Trump signed the Executive Order "Promoting Energy Independence and Economic Growth," which details the various rules and regulations that need to be revised or eliminated
Posted by Ricardo Raineri at 8:14 AM